been out cutting vines the last 2 days cos the weather has broken and its been sunny and miracle of miracles warm in the sun, making it an altogether agreeable experience. noticed also that after all my Perry walking these last 2 weeks or so i am definitely fitter than when i embarked on this task last year, though the hand hurts a bit today. Below is a shot from last years 'kladema' [pruning] which i took with the holga and am kinda fond of, see all those spindly branches? well they all need the chop 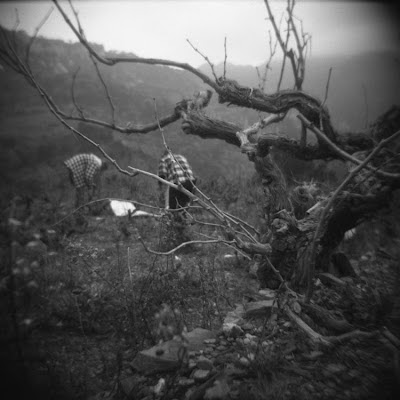 so when you finish at 4 and get back and eat something theres not a lot of energy left, but i'd made these little icon findings, an old destroyed tama wrapped around a miniature wood icon, a couple of cones from the same, so i put together the one earring last night, now i need to make 2 more cones and i can put together the other one. 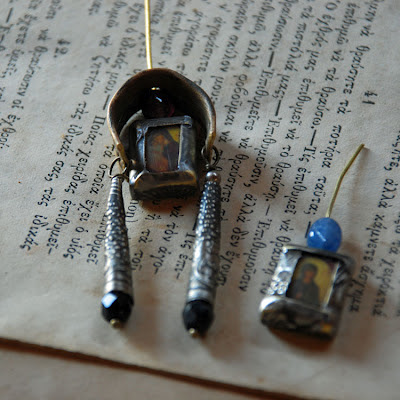 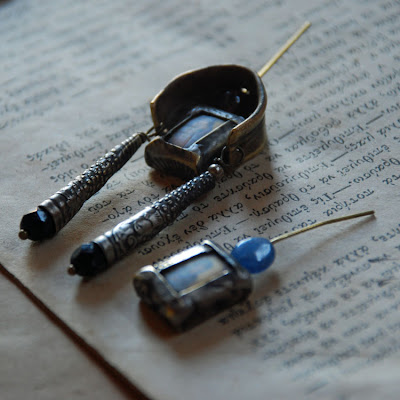 i did enjoy making the one a lot and am itching to make the other, think i'll be making a few of these, little shrine icons, i like the way influences and environment slip into things almost unconsciously, and i can feel a lot of greek orthodox there.

man am i exhausted

me and the dog, the dog and i have been traipsing all over the hills behind our house, looking into old abandoned farmhouses, climbing through beautifully terraced olive groves, losing paths, finding paths. it really is a walkers island. today i went with gabi and we were saying how many places we had missed by riding horses around the place for so long, foots make it all so much more accessible than 500 kilos on hoof.
well i took the digi and snapped a couple of things, that john very kindly processed for me cos all this traipsing and jewelry making doesn't leave much time for anything else. 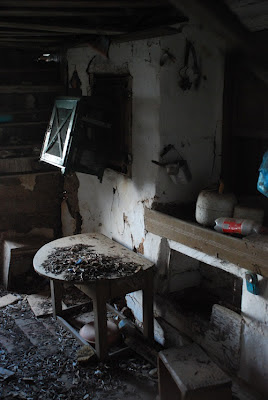 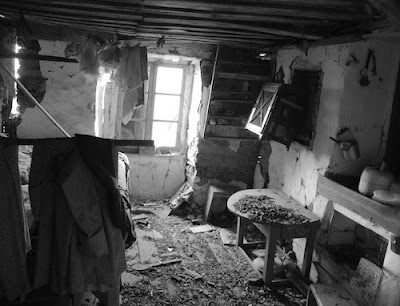 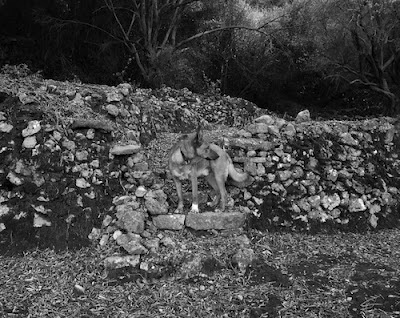 then there was the earring frenzy this morning, which was kind of pleasantly intense until i got hyperglycemic 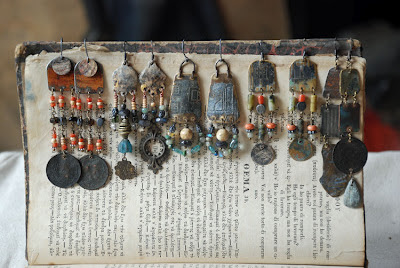 not sure whats going on but we've had endless lightning storms, huge gashes across the sky, house shaking thunder, was wondering if the solar flares had something to do with it. Well its winter and it crawls along with all its anxieties thrown in. i took these shots at the beginning of december or end of november when it was well under way. 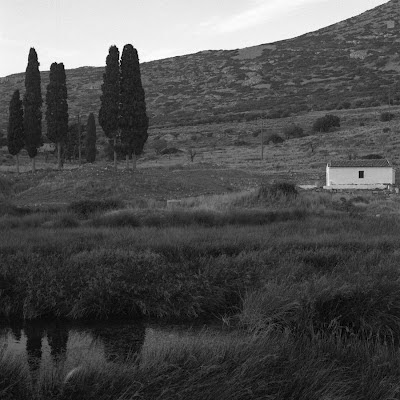 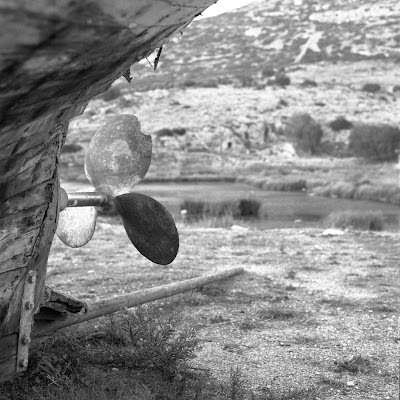 i don't sit well with winter, especially when it starts early. perhaps it will end early too. ideally would like to go somewhere hot and dry for most of the duration - dream on. still can't complain too much in view of whats going on in the rest of europe.

the other thing, i've been collecting driftwood and pumice stones on the beach, for making thinks and sharing, was doing it today in the pouring rain cos the dog had to get out, he loved it, and i had a brolly, but it reminded me of something i used to make a fair few years ago, these kind of beach people made from anything i found, little bit of a puppet, lots of fun, they sold like crazy, so i ended up getting sick of it, after that i couldn't see anything anthropomorphic on the beach even if it hit me in the face, but i saw some bits the vaguely inclined their shape to me today,
anyway heres a few of those puppets 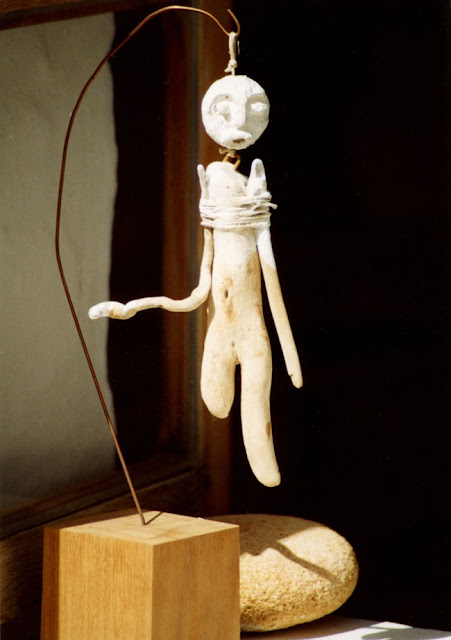 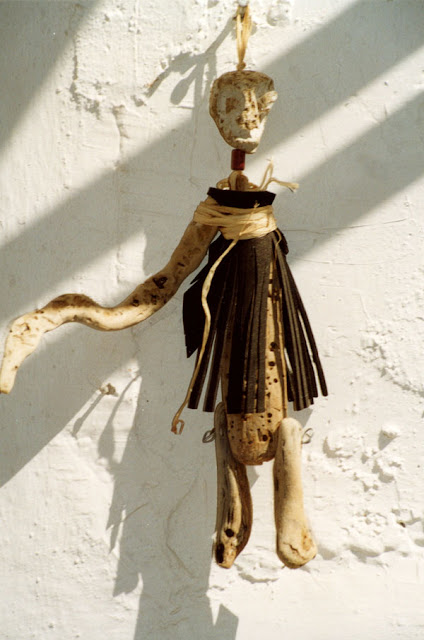 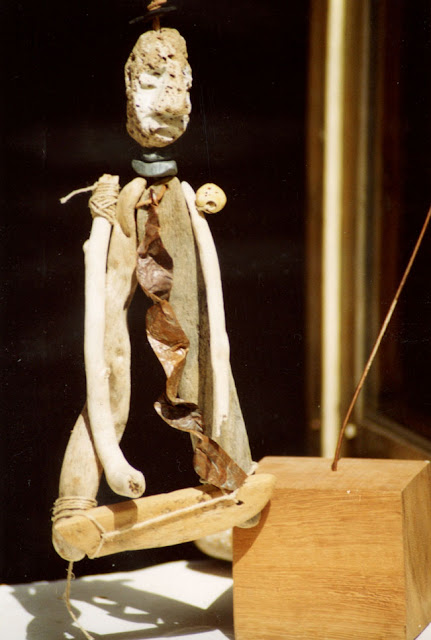 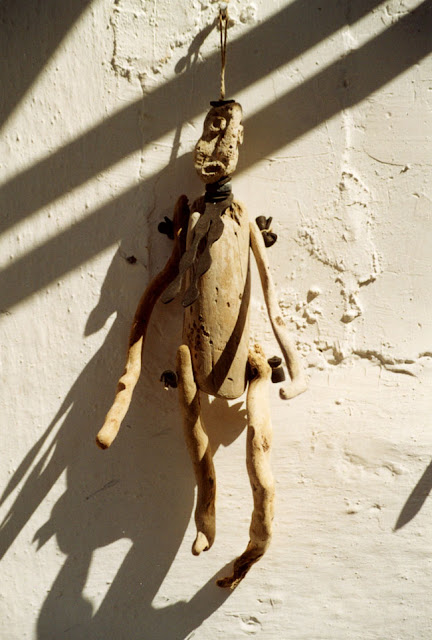 the heads i carved out of pumice and the rest was just whatever was around, these ones were about 30cm but i did make a couple that were almost a 100cm.

a tragedy and some work in progress

we've been really careful with perry - keeping him away from the chickens - trying to show him [stella's job] that they are not for chasing but for protecting. 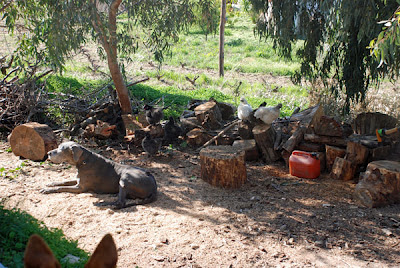 well the other day after i came back from one of me long walks john said that one of the chickens had been killed, evidence of feathers on the neighbour's land below, we thought it might have been a passing dog, but after further prowling around we discovered it was the neighbour's dog. they left a couple of months ago and abandoned the dogs to someone who comes once a day to feed them. this little neurotic rat had caught plucked and mauled the little grey white chicken on the right - dumping her carcass outside his barrel that serves as a kennel. as you can see in the pic even perry is showing restraint, john took this the day before because it looked like stella was shepherding chickens.
it was really sad - fortunately the dog that also had a tendency to bark all night has been removed.

well here some work in progress. some further exploration of the pouch theme, think i'm hooked on making them 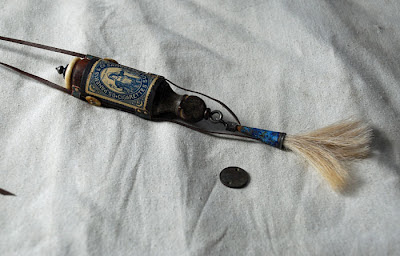 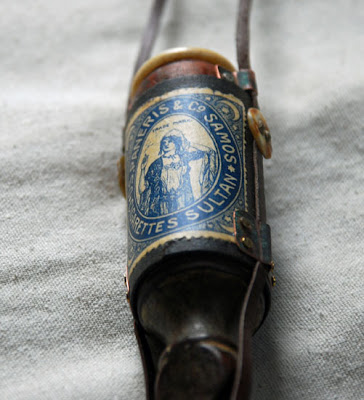 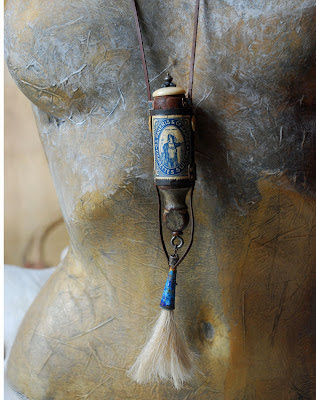 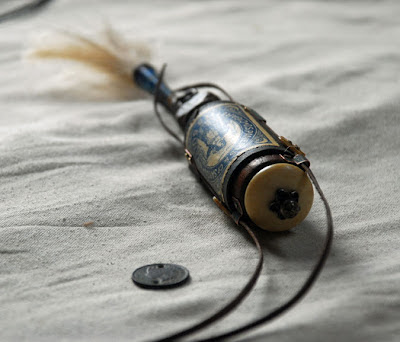 the image is an old tobacco stamp, probably some form of tax stamp, tobacco was grown and cigarettes were produced here for the ottoman market, its been glued onto the leather with a matt medium and sealed with it also. its waterproof now. the bottom part is a game piece, the top a part of another, with a bone or possibly ivory cap, the tassel is horse hair.

and something else i've been fooling around with - i wanted to find a way to work with some of the bigger pieces i got from steph, and i wanted something simpler, more sculptural 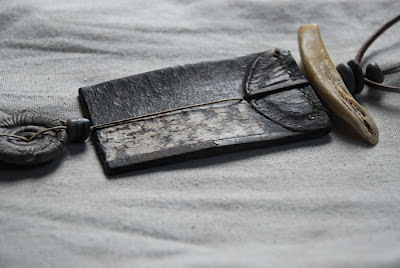 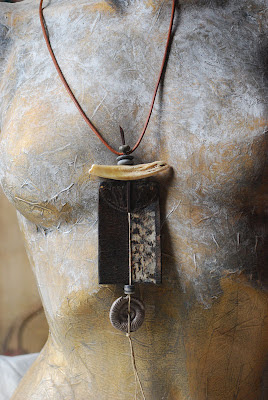 still needs a bit of work on the leather and am thinking of some gold leaf on the tooth. this also collaged with some beautiful transparent paper that has greek calligraphy on it. the design is a copy of a brilliant artist duo called amalthee creations its an exercise and something for myself.